Who is Dexter: New Blood for?

I ask this not to sound snarky or incredulous about the idea of doing a sequel series to Dexter, the beloved, and then reviled, drama starring Michael C. Hall as a serial-killer vigilante who only targets other murderers. We live in the age of IP, when no title that was once associated with a hit can ever be considered too radioactive for some kind of reboot or revival. Sure, everyone is still mad about Hall’s Dexter Morgan turning into a lumberjack — really, about most of the final four of the show’s eight seasons — but plenty of other series with loathed finales have come back in recent years, from Roseanne and Will & Grace to upcoming variations on Game of Thrones and How I Met Your Mother. The only surprising thing about a new Dexter story is that it took Showtime this long to revisit what was once its most popular series. What is dead may never die, and that includes lumberjacks.

No, I ask who New Blood is for because it is genuinely hard to tell based on the four episodes critics were given to review. Is it meant for viewers who loved the early years of Dexter and are glad to have Hall reuniting with original showrunner Clyde Phillips? For people who stuck it out through the increasingly miserable and aimless post-Phillips years and want some kind of apology for how badly the show went awry? For fans who love Dexter in all his incarnations, even the ones involving flannel and logging trucks? Or maybe it’s just for crime buffs with Peak TV decision fatigue who want to watch something they’ve heard of, even if they don’t really remember that season where the entire audience figured out way in advance that Edward James Olmos was dead the whole time.

New Blood seems simultaneously designed to appeal to all of those constituencies and none of them. (OK, anyone who somehow enjoyed Season Eight will likely be happy.) It is competently told but a bit dull. And, like its title character at this stage of his life, it seems too conflicted about all this blood and gore to enjoy any of it.

We pick up nearly a decade after the original series finale. Dexter has left the falling timbers of the Pacific Northwest behind and now works in a hunting and fishing supply store in the quaint upstate New York village of Iron Lake. Everyone in town knows him as sweet and kind Jim Lindsay (a nod to author Jeff Lindsay, who created the character), and while he no longer does blood-spatter analysis for the cops, he has recently begun dating the local sheriff, Angela Bishop (Julia Jones). Dexter was told in the final season that he didn’t have to kill, and he has tried very hard to prove that theory correct. Instead of imagining conversations with his late stepfather Harry, who taught him his famous code about only killing bad people, Dexter’s conscience is now represented by thoughts of his murdered sister Deb (Jennifer Carpenter), whose colorful way with profanity is here used to discourage her brother’s bloodlust. But Showtime wouldn’t order a new season that was just about Dexter helping customers pick out the proper rod and reel. Soon, there’s a dead body in need of disposal, various rich and powerful men trying to exert influence over Angela, and another serial killer who has set up shop in town, plus the arrival of Harrison (Jack Alcott), the now-teenage son whom Dexter abandoned in the series finale after realizing how badly he hurts everyone he cares about.

That Phillips is back is mostly a positive sign, but it’s not like his run on the original show was unblemished. Yes, he gave us the spectacular cat-and-mouse game between Dexter and John Lithgow’s Trinity killer in Season Four — and concluded that with an ending so perfect that it should have made future seasons redundant. And he gave us the mostly great Bay Harbor Butcher arc in Season Two, which invited the audience to question whether Dexter was another premium-cable antihero or just a monster with delusions of respectability. But Phillips also produced the largely inert third season with Jimmy Smits, and took the easy way out of the Bay Harbor Butcher plot — letting Dexter’s unstable girlfriend murder an innocent cop who had learned Dexter’s secret identity, rather than forcing him to do it himself — in a way that undercut nearly every argument the season had made to that point. (When Phillips’ successors began treating Dexter as more purely heroic, they were only going farther down the bad path he’d already begun to travel.)

Phillips is better at basic storytelling craft than many of his successors. Deb is a figment of Dexter’s imagination, and Harrison may as well be a new character, given how sparsely the old show used the little-kid version of him. So Phillips basically has to build a new supporting cast from scratch, and does a solid job of that. Angela seems less inept than most of the old detective unit at Miami Metro, Clancy Brown makes his usual strong impression as a local businessman with a mysterious agenda, and the townsfolk as a whole feel believable, if not that exciting. 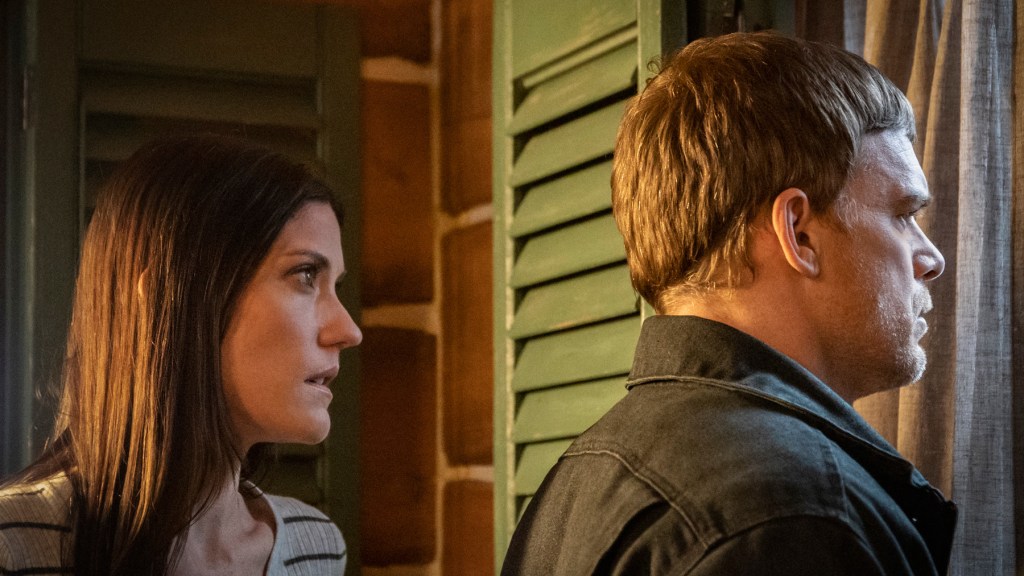 But even though Dexter is in snowy territory that looks wholly alien after all those years of Miami sunshine, this is not a fresh start for him, or for the show. Phillips may not have been involved in the later seasons, but he’s not ignoring them either. Deb — by far the most interesting supporting character from the original cast — is still dead, and while she’s a more entertaining ghost than Harry was, there’s only so much to do with her. And Dexter is still wracked with guilt over her death, as well as that of Harrison’s mother Rita and plenty of other people. When true-crime podcaster Molly (Jamie Chung) comes to town, Angela’s daughter Audrey (Johnny Sequoyah) admits to loving the genre because, “It’s murder, but it’s funny.” That was the tone Dexter adopted in its early days: cheeky bordering on campy, but in a way that blended well with the violence of Dexter’s world. The more seriously the show later began to take Dexter’s inner struggle with his violent urges — or, as he described the situation, “my dark passenger”(*) — the sillier everything felt. Though there are quirky flourishes in the margins — Dexter’s boss, Fred Jr. (Michael Cyril Creighton), isn’t happy that his husband wants to name their new dog Garfield, which he (rightly) thinks is a name for a cat — this is mostly a glum and ultraserious march through the snow, and one that wastes Hall’s dry comedic gifts. (One of the few overtly funny moments involving the main character is copied from a famous movie, which Dexter at least has the grace to acknowledge.) Dexter’s reluctance to get back to doing what he does best begins to feel like a mirror for a show that really (and rightly) isn’t sure any of this is a good idea.

(*) The TV series only had the rights to adapt the first Dexter novel, which means they never got a chance to tackle Lindsay’s story arc explaining that the dark passenger was a real entity — the supernatural offspring of the ancient god Moloch, no less — that had infected Dexter. Ridiculous as that sounds, it would have been more entertaining than most of what the series actually did before the end.

There’s also the matter of Harrison. No matter how creatively awry Dexter went in its original run, Phillips and the other producers were smart enough to largely avoid the unfortunate cable-drama trend at the time for annoying subplots about the main characters’ teenage offspring. Jack Alcott is convincing in the role, especially given what we’re told happened to Harrison since we last saw him, but his scenes will not likely leave anyone feeling like high school angst was the secret missing ingredient the show needed all along.

But really, all of this goes back to the most memorable Harrison moment of all, when Dexter found him sitting in a pool of Rita’s blood after Trinity murdered her in the Season Four finale. It was such an obvious full-circle moment for Dexter — who was himself “born in blood,” as he liked to say, under similar circumstances — that of course it would have been the series finale, had Showtime been in the business of ending highly-rated shows while they were still profitable. Dexter Morgan was not a character built for longevity, and that’s been as much a problem as any individual choice made as the series kept on going, and going, and then being revived. If he hadn’t become a lumberjack, it would have been some other dumb thing. Dexter’s new adventures are a bit more crisply-told than when last we saw him, but he still feels all used up.

“Sorry about the mess; I’m out of practice,” Dexter quips after he inevitably falls off the wagon and gets violent again. It’s meant as a meta joke about how long it’s been since the original run ended, and perhaps even a comment on how rusty those later seasons could seem. But neither he nor New Blood come to feel sharp enough to justify his return as anything but a nostalgia play for a property whose finale likely preempted a lot of nostalgia. Whatever conclusion Phillips writes for this miniseries almost by definition has to be better than Lumberjack Dexter, but is clearing the lowest of bars enough to justify returning to our man and all his old rituals?