“Her Majesty The Queen today conducted two virtual audiences via videolink from Windsor Castle,” Buckingham Palace said Tuesday in a press release. She received the ambassador from the Republic of Korea Gunn Kim, and the ambassador of Switzerland Markus Leitner, it said.

Last week a Buckingham Palace spokesman said
the 95-year-old monarch was admitted for “preliminary investigations” after she followed doctor’s orders to cancel the trip and rest.

A source close to the palace told CNN at the time that her stay in the hospital was “not Covid related.”

The Queen, along with British Prime Minister Boris Johnson, had been due to attend a church service in the city of Armagh last Thursday, marking the centenary of partition and Northern Ireland’s foundation.

Despite her advancing age, Elizabeth remains devoted to her work. 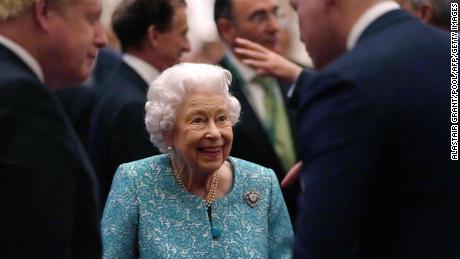 She is still expected to attend the COP26 climate conference in Glasgow, Scotland, which begins on Sunday. Earlier this month, the Queen was overheard saying
the lack of action on tackling the climate crisis was “irritating.”

Last week, she declined an honor of being named “Oldie of the Year” by a British magazine, saying she didn’t meet “the relevant criteria.” She “politely but firmly” declined the award through her assistant private secretary with “warmest best wishes.”

“Her Majesty believes you are as old as you feel, as such The Queen does not believe she meets the relevant criteria to be able to accept, and hopes you will find a more worthy recipient,” Tom Laing-Baker said in a letter.

Earlier this month, the Queen made the decision to use a walking stick in public for the first time “for comfort.”

While the Queen doesn’t appear to be slowing down when it comes to her ceremonial responsibilities, she has since handed off long-haul tours to other family members.

Still, she’s still traveling extensively across the UK, with CNN’s conservative estimates showing that the Queen traveled more than 1,000 kilometers (621 miles) from October 1 through to October 19.

CNN has launched Royal News, a new weekly dispatch bringing you the inside track on the royal family, what they are up to in public and what’s happening behind palace walls. Sign up here.