The “Saturday Night Live” version of President Biden was wishing for the good old days – before he was commander-in-chief — in this weekend’s cold open.

“Things are going to turn around though?” Biden pressed White House press secretary Jen Psaki (Chloe Fineman) after she told him his “CNN town hall was watched by no one and your approval rating is in the dumpster.

“I’m bad at lying so I’m going to leave,” she said before exiting.

Johnson’s Biden then began to reminisce about his carefree pre-Oval Office days.

“I don’t understand,” he said. “People used to like me. The press would call me Uncle Joe. I miss the old me. Where the hell did that guy go?”

“How can you be me?” Johnson’s Biden wondered. “You seem so happy, so carefree, so … what’s the word I’m looking for?”

“Lucid,” the other Biden answered. He explained that where he’s from – 2013 – Biden is still vice president.

“Easiest gig in the world. We’re like America’s wacky neighbor, you know? Just pop in with some ice cream cones, some aviator shades, just finger guns, you know, shake a few hands, rub a few shoulders.”

Johnson’s Biden warned him that in 2021 he’s no longer allowed to rub shoulders or shake hands anymore.

But that doesn’t stop Biden-past from giving his 2021 self a shoulder rub while telling him to “loosen up.”

He then gets a “whiff” of his latter self’s neck scent before telling him he didn’t want to sound sexist, “but you’ve got to smile more, Sweetie.” 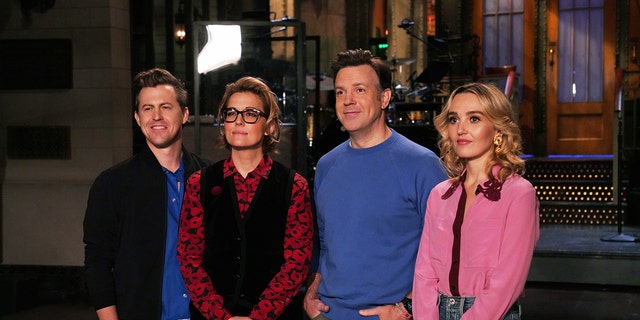 Biden-present then told his past self he was frustrated with Democratic moderate Sen. Joe Manchin, prompting the younger Biden to quip that the only Manchin he cared about was the “Playboy mansion!”

Getting ready to return to 2013, Biden-past advised his older self to stand tall and flash “those 100% natural choppers we’ve got and remember we may be from different eras but at the end of the day we’re both Joe freakin’ Biden.”

Sudeikis, a former “SNL” cast member, has previously played Biden on the show. He now stars in the hit TV series “Ted Lasso.”

Brandi Carlile was the musical guest.

The show’s “Weekend Update” segment also took a few jabs at the president, joking that while he admitted he hasn’t visited the southern border his “approval rating has.”

“Insiders are also saying that during meetings President Biden repeatedly uses the ‘F’ word in conversation,” co-host Colin Jost said in a setup. “More concerning, the ‘F’ word he keeps using is ‘forget.’”