Meghan Markle has found another cause to advocate for.

Since joining the royal family, the former actress has dedicated her time largely to charity and advocacy work and has now set her sights on paid leave for parents.

The 40-year-old royal sent a note to House Speaker Nancy Pelosi, D-Calif., and Senate Majority Leader Chuck Schumer, D-NY, this week pleading for her cause.

“Dear Leader Schumer and Speaker Pelosi, I’m not an elected official, and I’m not a politician. I am, like many, an engaged citizen and a parent,” the Duchess of Sussex began in her lengthy note. “And because you and your congressional colleagues have a role in shaping family outcomes for generations to come, that’s why I’m writing to you at this deeply important time—as a mom—to advocate for paid leave.”

MEGHAN MARKLE’S ESTRANGED FATHER THOMAS PLEADS TO MEET HIS GRANDCHILDREN: ‘SHE SHOULD START TALKING TO ME’

She said that the pandemic – which has lasted for nearly two years at this point – “has exposed long-existing fault lines in our communities.” She also pointed out that a large number of women have had to drop out of the workforce in order to stay home with their children while schools and childcare facilities were closed to avoid the spread of coronavirus.

Meghan Markle sent a letter to Nancy Pelosi and Chuck Schumer to advocate for paid leave, for parents and mothers in particular.
(Photo by Getty       )

“The working mom or parent is facing the conflict of being present or being paid. The sacrifice of either comes at a great cost,” Markle insisted. “For many, this sacrifice goes back further than the past 20 months; it’s 20 or 30 years, even longer—decades of giving time, body, and endless energy not just in the pursuit of the American dream, but simply the dream of stability.”

The “Suits” alum recalled dining at cheap restaurants as a child, which her parents has to work “hard” to afford.

Markle also reflected on her first job, working at a frozen yogurt shop at 13, before waiting tables, babysitting and piecemealing jobs together “to cover odds and ends.” She said that despite working hard, most of her money went toward rent and gas.

“I expect many of your constituents have their own version of that story. Perhaps you do too,” she noted. “People in our country work incredibly hard, and yet the ask is soft: for a level playing field to achieve their version of a common dream—what is fair, and equal, and right. Many of our economic systems are past their expiration date, and as you well know, too many Americans are forced to shortchange themselves when it comes to what matters to them.”

“The Bench” author then made note of her own privilege, explaining that when she and Prince Harry welcomed their daughter Lilibet in June, they “weren’t confronted with the harsh reality of either spending those first few critical months with our baby or going back to work” and didn’t “have to make impossible choices about childcare, work, and medical care that so many have to make every single day.” 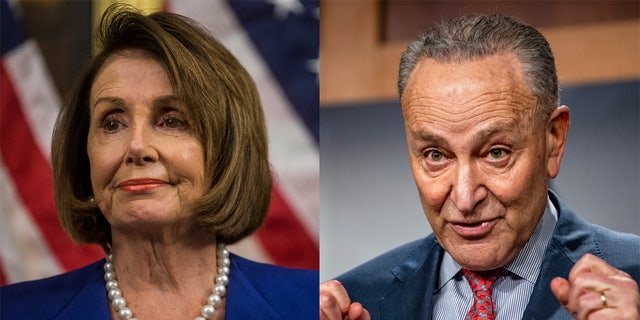 Nancy Pelosi and Chuck Schumer have both advocated for paid leave in the past.
(Getty Images)

“No family should be faced with these decisions,” Markle insisted. “No family should have to choose between earning a living and having the freedom to take care of their child (or a loved one, or themselves, as we would see with a comprehensive paid leave plan).”

“… Because when paid leave is a right, we’re creating a foundation that helps address mental health outcomes, health care costs, and economic strength at the starting line,” she continued. “Instead, as it stands now, we spend a fortune as a country paying into symptoms rather than causes.  I understand that with everything going on these days, people might find it easy to be apathetic about what’s happening in Washington, D.C. And then equally, when it feels like your voice doesn’t matter, you tend to use it less often, but with stakes this high none of us can afford to let apathy win.”

Furthermore, she said the letter was written “on behalf of millions of American families” and cited other countries’ “robust” paid leave programs, such as Estonia’s, which she said “offers over a year and a half of leave to be shared by new parents.”

“The United States, in stark contrast, does not federally guarantee any person a single day of paid leave. And fewer than one in four workers has dedicated paid family leave through their employer. I’m sure you agree that if we are to continue to be exceptional, then we can’t be the exception,” she added. “The families you represent need your strong leadership. With paid leave on the cusp of becoming a national reality, I trust you will meet this moment. I know you must hear from your constituents about the choices they are facing every day to make ends meet and care for their families.”

Markle insisted that “paid leave should be a national write rather than a patchwork option limited to those whose employers have policies in place, or those who live in one of the few states where a leave program exists” and added that “a new era of family first policies” ought to include “a strong paid leave program for every American that’s guaranteed, accessible, and encouraged without stigma or penalty.”

The Duchess pointed out the current political division but insisted that this topic transcends such boundaries and is “about putting families above politics.”

She concluded: “So, on behalf of my family, Archie and Lili and Harry, I thank you for considering this letter, and on behalf of all families, I ask you to ensure this consequential moment is not lost.”

Reps for the politicians did not immediately respond to Fox News’ request for comment.