Observations from the Penguins’ 1-0 win against the Sabres:

First things first, there wasn’t really much of an update on Penguins forward Evgeni Malkin after the game. He did not record a shift for the final 8:48 of regulation. Roughly midway through the third period, he was hit by Sabres forward Dylan Cozens with his right knee appearing to be the focal point of contact.

Malkin recently missed 23 games due to a presumed right knee injury so there’s plenty of reason for concern.

Coach Mike Sullivan indicated Malkin, who remained on the bench for the duration of the game, was kept off the ice as a precaution.

“(Malkin) thought he tweaked something on that collision,” Sullivan said via video conference. “He got checked out afterwards and felt fine. We don’t anticipate any issues moving forward. We held him out for precautionary reasons down the stretch.”

As for the game, the Penguins scraped out a difficult win against an inferior opponent and won the East Division in the process (thanks in part to the Washington Capitals needing to go to overtime on Saturday).

The Penguins will enter the postseason as the top seed of their division despite plenty of concerns.

• Their goaltending has plenty of questions.

• The penalty kill has been a struggle most of the season.

• Their defensive game can flat out stink many games.

The Penguins have more than a few shortcomings.

But they have a shot.

They have a legitimate shot at winning the Stanley Cup.

Especially since so many other teams viewed as contenders have plenty of their own shortcomings.

This Penguins team isn’t nearly as deep or as good as the teams that won the Stanley Cup in 2016 or 2017.

But the rest of the NHL in 2020-21 isn’t that daunting either. That’s to say there isn’t a truly great team entering this postseason.

If an unremarkable squad such as the 2019-20 Dallas Stars can reach the Stanley Cup Final, the 2020-21 Penguins are surely capable of the same feat.

“It’s hard to win in this league unless it’s a team effort, unless it’s a collective effort,” Sullivan said. “You’re not going to win with one or two or three players that are scoring their way. The league is just too difficult. It’s too hard. When you look at Stanley Cup championship teams, they are teams in the truest sense of the words. We preach that a lot with our group. I think part of it is the chemistry that’s developed off the ice and that translates on the ice. We like the group that’s assembled here. We think we have become a team and now our challenge is ahead of us. Now, it’s just an opportunity. We’ve got to go out and earn it.”

The Penguins got the game’s only goal 1:58 into the second period thanks to forward Jeff Carter, who collected four goals during Thursday’s 8-4 home win against the Sabres. Stealing a puck from Sabres defenseman Colin Miller off of Buffalo’s end boards, Penguins forward Frederick Gaudreau shuffled a pass to the front of the crease. Sabres forward Anders Bjork broke up the pass but deflected the puck into Carter’s right shoulder and it caromed into the cage. Carter was credited with his 17th goal of the season. Gaudreau had the lone assist.

• Penguins defenseman Kris Letang led the game with 25:59 of ice time on 24 shifts.

• Defenseman Rasmus Dahlin led the Sabres with 24:18 of ice time on 21 shifts.

• Letang and forward Bryan Rust each led the Penguins with two blocked shots.

• What a performance by Maxime Lagace. Playing his first NHL game in over two years, he comes through with his first career shutout.

He was sharp. And he had to be. The Sabres largely outplayed the Penguins for the first two periods and challenged Lagace quite a bit. And he stole a few goals. At 6-foot-2 and 190 pounds, he’s not an overly big goaltender, particularly by the bloated standards the position has taken on in 2021. But he made himself large in net, not really giving up many clean looks at the cage.

He earned his first career shutout in many ways.

• The Sabres really controlled this game through the first 40 minutes, outshooting the Penguins, 24-9. It was a pretty flat performance for the home team. Was this a more talented opponent like the Boston Bruins or New York Islanders, this is maybe a different story.

• The Penguins did a pretty good job in the third period controlling play as they dominated shots 14-5.

• It might have been something of a happy accident, but the Penguins appear to have found something with Gaudreau on a line with Carter and Jared McCann. Gaudreau is a buzzsaw on the boards hounding opponents for pucks and finds ways to get them to Carter or McCann to do some damage.

• Penguins defenseman Chad Ruhwedel was back in the lineup after being a healthy scratch for 26 games. Primarily deployed on the left side of the second pairing with Cody Ceci, the right-handed Ruhwedel logged 12:45 of ice time on 19 shifts and had two shots on two attempts.

• Give the Sabres credit. There was nothing for them to gain in this game but they gave a massive you-know-what two days after a soul-crushing blowout loss to the same opponent. The Sabres came to play.

• Houser, of Wexford, rebounded well after that ugly game on Thursday. The only shot that beat him wasn’t even really a shot as it hit off of Carter’s shoulder. In all, Houser stole a few goals himself.

Following the game, the Penguins made a considerate gesture and named him the third star of the game.

• All four goaltenders who dressed in this game — Lagace and Alex D’Orio for the Penguins as well as Houser and Stefanos Lekkas for the Sabres — were undrafted. Certainly a rarity.

• Lagace became the first goaltender in the franchise’s 54-year history to record a shutout in his debut with the team.

• Lagace became the 55th goaltender to record a regular season win for the franchise and the 36th to record a shutout.

• Lagace’s last NHL game came as a member of the Vegas Golden Knights in a 5-2 road loss to the Carolina Hurricanes, Feb. 1, 2019.

• Lagace, Casey DeSmith and Tristan Jarry each recorded a shutout this season. It marked the first time the Penguins have had three goaltenders collect a shutout in the same season since 2017-18 (DeSmith, Jarry and Matt Murray).

• The Penguins shut out the Sabres three times this season. This was the first time in franchise history they shut out the same opponent that many times in the same season.

• Forwards Jake Guentzel and Bryan Rust were the only members of the Penguins to appear in all 56 games of the regular season. 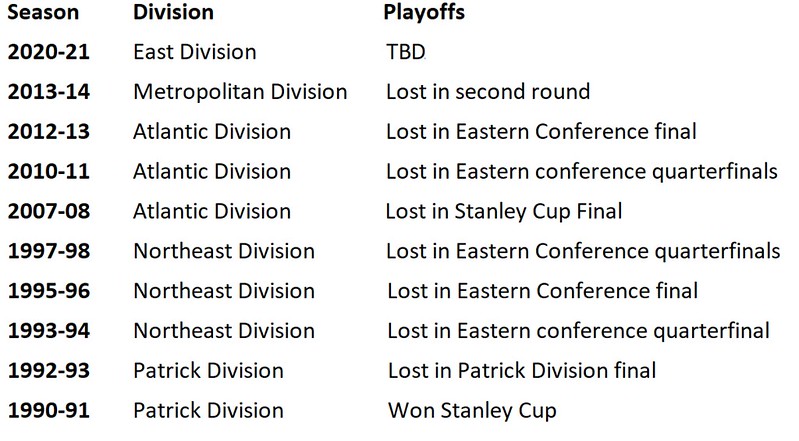 • Lagace was grateful to get into his first NHL game in over two years.

“I’m very proud to be able to be part of the Penguins. And obviously, tonight is going to be a night that I’ll remember for sure. (The moment) that I’ll remember the most is when the buzzer sounded at the end there. I don’t even know how to describe it. It was such a relief. Within the last four minutes, I’d say I started thinking about the shutout. It was creeping into my head a little bit. I wanted it so bad. The boys didn’t give up a shot. I’m thankful. I’m very, very happy to be here.”

• McCann was asked what the Penguins improved on the most over the regular season and what areas still need sprucing up:

“Offensively, we’ve been great. We’re finding each other in the (offensive) zone and making (the opposing defense) tired and doing all the right things. It’s been good offensively. But defensively here, I think we can tighten it up a bit and not look to cheat offensively.”

• Penguins defenseman Marcus Pettersson on his team’s play over the course of the season:

“Our resilience overall. It’s been a different year with the protocols. Fortunately, knock on wood, we haven’t had any bigger implications with (covid-19). But we’ve had a lot of injuries. Guys have stepped up. Our group resilience and our mindset — the next guy up — has been terrific all year. What we can improve on … when we defend and we kind of create our offense from our defense, that’s how we’ve got to play. We’ve seen when we don’t do it, we get punished. When we do it, we get rewarded. That’s something to keep building on, keep doing.”

Seth Rorabaugh is a Tribune-Review staff writer. You can contact Seth by email at srorabaugh@triblive.com or via Twitter .